T. S. Eliot observed that April was the cruellest month, but on my side of the Rockies it’s definitely February. Look into this bleak canvas long enough and you begin to doubt if sun and blue sky still exist. 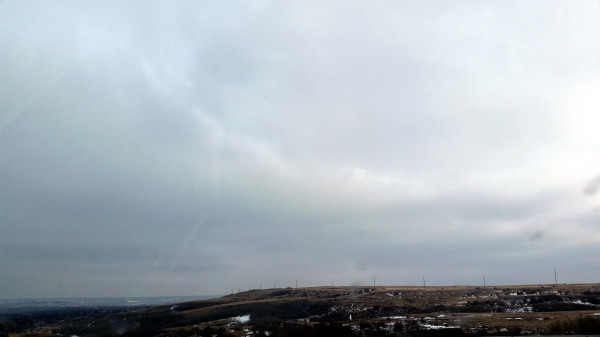 The anniversary of HST’s death is one that I have put off writing about for each year, almost every year. It’s hard to write in starry-eyed ways at 40. Yet today there was still something that I could write about that came from the same place of sincere admiration and affection.

I’ll put it plainly - I miss that my friend B is not in this world anymore.

If you remember the very early days of this site, it had a mirror version. Back then a generous fan helped it get out of Geocities. Afterwards and out of the blue I heard from B, who offered me mirror hosting. From that moment a nerdy friendship was born. It was thanks to B that many fans enjoyed the message board and other things that I was not able to configure at the time. Remember it was 1998. You could buy an entire book on how to FTP or program your modem! PayPal was not a thing and each Canadian postal money order I sent off for an eBay win also went with the hope that the seller would cash it at a real post office and not a US bank.

The Internet is so effortless these days. I might as well hitch an onion to my belt and whine, “Now, to take the ferry cost a nickel, and in those days, nickels had pictures of bumblebees on 'em. Give me five bees for a quarter, you'd say!”. It was onerous to find fellow fans when searches turned up Hubble Space Telescope pictures. Don't get me started on the days of non-graphical Internet.

We still enjoyed our friendship, even if it was more distant now as we moved on to meatspace things. It was a shock to find out that he passed away last year and that he was actually just a few years older than I. This is the dissonance that life on the screen brings - we're all ageless, timeless, even faceless. B did not like having his picture taken (neither do I) and the first time I saw a photo of him was after he died last year.

A few days ago, sitting at the kitchen table, I was overcome by the most intense grief while looking out into the foggy void. Someone that made such a difference in my life is not out there making a difference in other people’s lives. The truth of that was too heavy. I miss my long-distance brother, that I can no longer ping with a joke or a note. All I have is his FB page to visit. This is mourning in the digital age. Scroll up, scroll down, click click. Save it before it disappears like so many ICQ messages.

It's a left right punch to my heart and gut, how deeply I still feel the kindness of people who ceased to be random strangers. All we could give each other was friendship and chat and that was enough. Fandoms have a huge appetite for consumption (witness the amount of fan stories, art and recordings for anything) and along with it is a huge desire for connection. The Internet makes this possible, made this especially possible in the late 90s. Science fiction and comic conventions and clubs have existed for some time, not so much for other genres. Nowadays at the comic expo one can always run into one or two HSTs kitted out with fly swatters and there's no need to explain.

The Internet was supposed to be a fad like CB radio. It wasn’t “real”. Twenty years on there are still people who will say it’s not real. Of course the people behind the screen are real. The quiet pause when the news that an old gonzo fiend has passed away is real. The profound effect that HST had on more than one person's life is very real.

Maybe February isn't the cruellest month, but it is the most melancholy of months where so many anniversaries and remembrances pile up. It's not quite winter, not quite spring. Chinook winds push and pull the snow as easily as memory pulls on my heart strings. There was another friend that I was going to write about today, who has also passed away, but I’ve had enough feels for one week. The shortest month has already been long enough.
Collapse